In 1995, when he was Mad Scientist Guest of Honor, I wrote about "Tullio in the 1980s" for the Duckon 4 program book. But for some reason I never learned, the essay was never published. (Presumably others were to write about other periods of Tullio's life.) It appears here for the first time. Duckon is held in the Chicago area.]

Tullio Proni, Man of the Eighties

I love technology, and I love hanging around with the people who revel in it. There's something magical about a dreamer who combines a wild imagination with the discipline to bring aluminum, eight-pin LM555 timer chips, laser diodes, and plexiglass to life. That's Tullio-- a warm and wonderful friend. I've been asked to talk about his career in the Eighties. 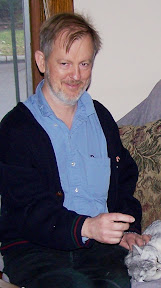 It was in this period that Tullio Proni became fascinated with lighter-than-air flight.

I remember when he stalked an advertising blimp all day, finally cornering it in its lair, and then bombarded its crew with technical questions about airship operations.

I think he was the First Boy On His Block to have a cylinder of helium in his kitchen. (This was fun for those of us in his circle who were musicians too. Pass a couple of balloons around the living room. When everybody has a lungful, get 'em to sing a chorus of "Benson, Arizona" in unison and you'll see what I mean. It sounds like a priory full of Benedictine Ducks.)

By 1985 several modest garbage bags, inflated with helium, supported a slim stick of balsa wood sailing across the kitchen. There were much larger garbage bags for sale at Meijer's Thrifty Acres. Experiments in using a steam iron to seal them ensued. Soon the dreamed-of General Technics Atrium Blimp1 darkened the skies of Midwestern convention hotels. A long pair of wires led from the control box to a beautiful balsa space frame. Propellers driven by paired, reversible electric motors enabled Tullio to maneuver even in tight corners and hallways.

Techies infect each other with their ideas. Many friends helped contribute to the blimp designs, or built blimps of their own. I'm certain the enthusiasm generated by the Atrium Blimp was vital in inspiring Guy Wicker, the Upper Peninsula's answer to Alberto Santos-Dumont, to organize the construction of a series of full-sized hydrogen balloons. This culminated by the summer of '89 in the vast, grotesque-- but functional!-- Wicker-carrying blimp. The Blimp Meadow also served as a firing range for Tullio's new creation, a lovingly machined muzzle-loading cannon which fired golf balls high into the Michigan skies. Fortunately, we didn't operate the two devices simultaneously. 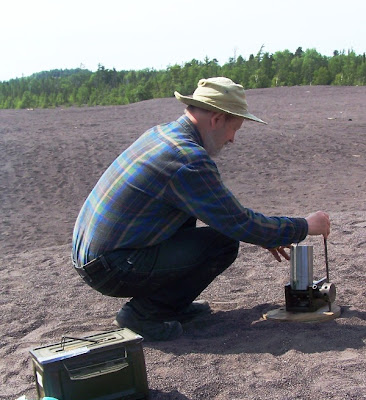 Meanwhile, Tullio amused himself building universes as a Dungeon Master, a task to which he applied his usual painstaking care. Once a month, friends from Detroit, Chicago, and Kalamazoo would gather to grope their way through "a magic/tech world using Jack Chalker, Nicolai Tesla, George O Smith and tube-tech," as Mike Bentley describes it. "Extensive timelines, maps, descriptions... If I weren't playing in his world, I'd love to just look at his documents to see what he did. My chronicle of our journey through his world is over 400 pages."

Tullio, a canny observer of human nature, formulated what we now know as Proni's Law: "There's nothing a techie won't try-- in someone else's house!" All too often, however, it was the green house on Walnut Street which served as a laboratory.

As you may know, in his student days Cap'n Al Duester became famous for cooking hot dogs in his hotel room by running wall current through them. Tullio owned a Tesla coil, so he began wondering: "If 120 volts cooks a frankfurter in a few minutes, wouldn't 20,000 volts cook it MUCH faster?" Alas, in the only experiment he conducted, most of the hot dog wound up in the atmosphere. Wasn't a total loss, though-- the oily mist proved an excellent medium for making laser beams visible.

Tullio can't resist a surplus bargain. Once he came home with an armload of cheap screwdrivers and deposited them in various strategic locations all over the House of Isher, saying, "If you can't find something, you don't own enough of them."2

Since Tullio and I both had families in South Florida, at Christmastime we would drop in on each other. Once he showed up on the Higgins doorstep after scoring a major surplus victory: a titanic tangled ball of Christmas lights. Most models of Proni rayguns employ colored lightbulbs for that flickering effect. In this meter-wide jumble were enough bulbs to arm three divisions of Imperial Martian Parachute Ski Marines. All Tullio needed was to snip off each bulb along with a couple inches of leads. So, once we'd scoured the house for all available pairs of wirecutters, my dad and the rest of the family began plucking Christmas lights. It was kind of like harvesting grapes, except we did it indoors, not outdoors, on the floor in front of our TV, and the vines were more tangled. Now Tullio should have enough to last well into the next century... 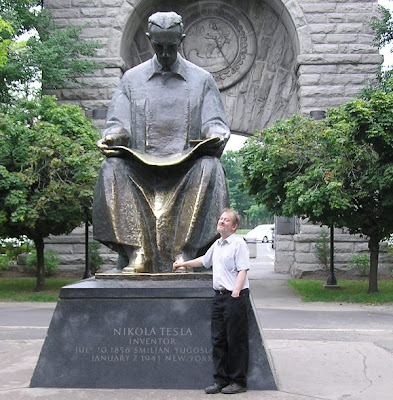 [2011: Tullio is no longer peddling rayguns, but he still practices his craft now and then. A steampunk rifle, sporting copper coils, polished wood, and bubbling glassware, has been seen around Michigan. In recent years he has returned to balloons, lofting camera platforms above the countryside. No word on how the supply of Christmas bulbs is holding up.]

1Tullio was one of the three founders of the fan group General Technics, back in 1975.

2This has become known as Proni's Second Law.
Tags: higgins's lives of the fans
Subscribe