The essay below was written for Windycon 38 near Chicago, which invited Hugh Daniel to be Fan Guest of Honor in November 2011.]

Hugh Daniel: Hauling on the Future

When I met Hugh Daniel, he was a bright, articulate young man at a science fiction convention. He knew a lot about computers--and was learning more, at a frightening speed. Hugh is a hacker, in the best sense of the word. He can make machines sit up and sing. He can use them to do simple, humble tasks or great, ambitious tasks. He uses his skills to help people. As Kevin J. Maroney once said, "A better future isn't going to happen by itself." 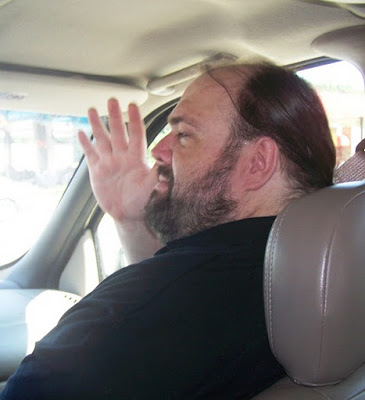 Hugh Daniel gestures during an animated conversation, which is practically the only kind of conversation he ever has.

Hugh was trying to make the Nineties happen in the Eighties. He was using mice, windows, and bitmapped screens years before they showed up in ordinary personal computers. He was part of a team trying to code a glorious hyperlinked universe of software, servers, and documents called Project Xanadu. He helped set up an online forum called The WELL . He agitated for restrictions on strong cryptography to be lifted, the better to protect online privacy and civil rights. He introduced me to other notable hackers. Briefly he worked for a company that built a new kind of rocket.

This is stuff a lot of people were doing in the Nineties, but only a few in the Eighties. I had a sense that Hugh had lassoed the future, and was trying to tug it closer to the present. Maybe, I like to think, it arrived a little bit ahead of schedule because Hugh was pulling so hard.

Naturally, these were exciting ideas. I used to pick his brains about computers. He used to pick mine about physics. Both of us were in love with spaceflight. We'd have a grand time talking, long into the night. When we manage to get together these days, we still do. I think he still has hold of that lasso; the other end is somewhere in the 2020s now.

A convention is always more interesting if Hugh is in attendance. We have taken road trips together. I have a photo of Hugh's legs sticking out of the nozzle of a nuclear rocket engine. Good times. 
When help is needed, Hugh will step in. You may have seen him do this at SF cons, where he is often found behind the scenes in the Operations room. I have seen him step in and help under more unusual circumstances.

Hugh and I, in a borrowed convertible, were touring a hilly area near Palo Alto. Somebody had pulled over to the side of the road. We stopped to see if they needed help. Turned out THEY had spotted a fire. We were joined by a couple of local park department guys in a pickup truck. They used a radio to call the fire department.

None of us were firefighting, just watching the fire grow. Hugh demanded to know if there were tools in the truck. Only one shovel. He grabbed it and started furiously digging a firebreak line between the fire and the road. He'd done this sort of thing before. Gradually, the volunteer fire department arrived, with serious vehicles and tools, and began to put the fire out. Only when they had it under control was Hugh willing to stop shoveling, return the shovel to the parks department, and continue on home.

Later, I told Greg Ketter, the bookseller , about this.

"You know the moral of this story, don't you?" said Greg.

Keep an eye out for Hugh this weekend. Big guy. Often wears a kilt. Full of opinions. Good with gadgets. You'll know him if you see him. I recommend you make his acquaintance.


4 June 2013-- Edited to add: Hugh Daniel passed away on 3 June 2013 at his home in California. My condolences to all his friends and family. I'll miss him.
Collapse