Sasquan, the 73rd World Science Fiction Convention, starts Wednesday, 19 August, in Spokane, Washington. Here are the program items I'm scheduled to participate in. (Keep an eye out for last-minute changes…) "CC" refers to rooms in the Spokane Convention Center. "M" designates a moderator.

What are the latest astronomical discoveries? What are the upcoming events in the exploration of the solar system? Find out what is happening out there and what we are doing about it.

From classics like Hal Clement's Iceworld to Patricia Briggs' Mercy Thompson books, Washington state has been the setting for many works of SF & fantasy.

[Hmm, this is looking a bit thin.]

Celebrate the 100th anniversary of the theory of relativity by exploring what physicists have been doing for the last 100 years, the status of the theory today, and what might change in the future.

[I'm by no means a relativity expert, and can only hope I will be able to add a few remarks to the conversation.]

Pluto has now been explored! Join scientists to see what NASA has learned about the famous icy world on the edge of our Solar System.

[This is an item in the children's program, so Guy and I will be discussing Pluto with young people.]

Asteroids are relics of the ancient Solar System. NASA's Dawn spacecraft orbited Vesta for a year. Now its ion thrusters have propelled it across the Asteroid Belt to Ceres, the largest asteroid, where Dawn has again entered orbit. Join Bill Higgins to explore Dawn's findings at Vesta and its plans for doing science at Ceres.

Join us for a fun discussion that delves into the mysteries of teaching science and technology to kids. What's a good starting point? Does it always have to be "fun"? Which sci-fi concepts might today's teens be turning into reality twenty years from now? We'll discuss all of these things and more!

We're attending Sasquan. K and I have a reservation for a room in the Doubletree from the 19th to the 24th. It has two queen-size beds. It would be nice to share the cost of the room with one or two others.

Okay, I was nowhere near the Deepsea Challenger when it caught fire. I was in another state at the time.

And I'll repeat that I had nothing to do with the loss of that other submersible. So quit spreading rumors.

Over on the Vatican Observatory Foundation blog: On the Road to Pluto

I will get in a car and drive various places. On Sunday, I expect to arrive in Laurel, Maryland.

I saw Neptune long ago and I am very glad to have lived long enough to see Pluto explored by a spacecraft.

Over time, I hope to tell a lot of people about it. People at Musecon, Worldcon, and Windycon, to begin with.

See you on the far side.

Just ten days away from Pluto, the New Horizons spacecraft had an "anomaly" yesterday and went into "safe-mode." It switched control to its backup computer and tried to establish contact with Earth.

This made a lot of us anxious, despite assurances that the spacecraft was probably fine.

NASA has announced that recovery is going well and New Horizons "remains on track for its July 14 flyby of Pluto:"

Preparations are ongoing to resume the originally planned science operations on July 7 and to conduct the entire close flyby sequence as planned. The mission science team and principal investigator have concluded that the science observations lost during the anomaly recovery do not affect any primary objectives of the mission, with a minimal effect on lesser objectives.

Nothing like a little suspense to make a flyby more exciting. Time to get some sleep. 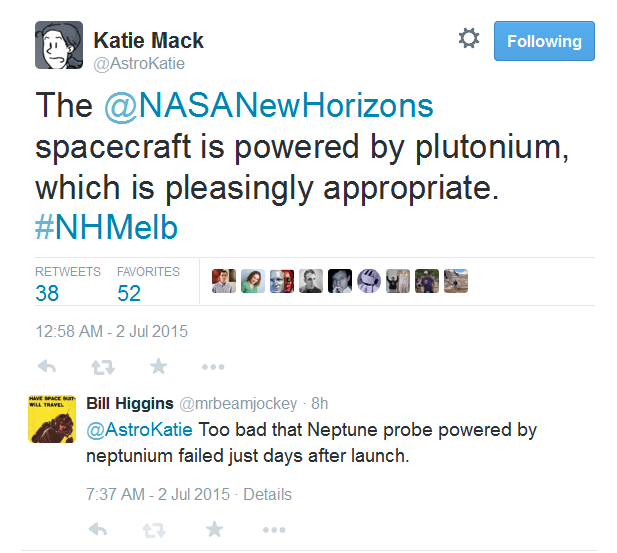 About a year ago, I borrowed from my local library Denise Kiernan's book The Girls of Atomic City: The Untold Story of the Women Who Helped Win World War II. Unfortunately, I hadn't yet finished it by the due date, so I had to take it back to the library.

Having turned the book in, I strolled over, as is my wont, to the used-book-sale shelf. Because you never know what you might find there. I found this: 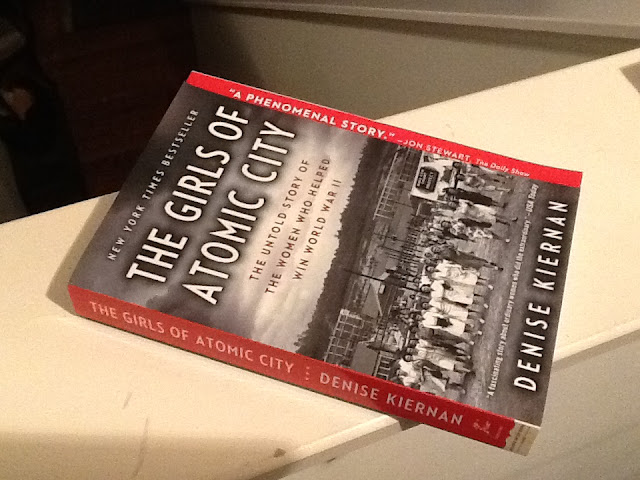 Obviously Fate intended me to be united with this book. I'd already read enough of it to know that it was well worth owning. I paid a dollar and went home with my very own copy.

In the course of time, the Ela Area Public Library District chose The Girls of Atomic City as this year's tome in their One Book, One Reading Community program. They've lined up a variety of speakers over the summer weeks. I've agreed to give a talk on Wednesday, 8 July.

Physicists discovered that uranium fission could be applied to make a devastating weapon--but it would take the help of hundreds of thousands of citizens working under the cloak of secrecy to make nuclear bombs a reality. Join Fermilab physicist William Higgins as he shares insights into this urgent effort...one of many memorable WWII dramas.

Kiernan's book concentrates on the women who worked at Oak Ridge. I'll be giving an overview of the Manhattan Project. Hanford and Los Alamos were two other sites where secret towns employing thousands of workers sprang up to meet the needs of the massive project.

I hope to say a few words about why Kiernan's book is both interesting to the average reader and also to the reader already steeped in Manhattan Project lore.

I'm pleased that the Library District has invited me, and I'm looking forward to my visit.

This year's John M. Higgins Award for Best In-Depth/Enterprise Reporting was given today to Bryan Burrough, Sarah Ellison, and Suzanna Andrews of Vanity Fair for their article "The Snowden Saga: A Shadowland of Secrets and Light."  Congratulations to them.

Today in New York the annual Mirror Awards ceremony, sponsored by Syracuse University’s S.I. Newhouse School of Public Communications, honored "the reporters, editors and teams of writers who hold a mirror to their own industry for the public's benefit."

As you may know, the John M. Higgins Award is named for my late brother.

Here's a list of all of today's 2015 Mirror Awards winners.

Here's a list of all the Higgins Award finalists.

I'm always pleased to thank Discovery Communications and Time Warner Cable for their gift establishing the Higgins Award. I am also grateful to the people of the Newhouse School for their work continuing to celebrate journalism about journalism.